Wi-Fi has just turned 20, becoming one of the most adopted technologies and greatest success stories of communication history - over 30 billion devices are Wi-Fi enabled, out of which over 13 billion devices are active in use, and 4 billion new products are added annually. Wi-Fi carries today over half of the global data traffic and contributes over $2 trillion USD to global economy every year. Today, Wi-Fi is using the license exempt spectrum in 2.4 and 5 GHz, and the truth is that it’s close to reaching resource deadlock. The available spectrum is just not enough, and we better do something about it.

It has gotten to a point where the existing spectrum is too congested and doesn’t meet modern requirements for next-gen applications, services and scale. The Wi-Fi industry has the solution: let’s boost the spectrum up to 6GHz. However, not everybody is happy about it.

The Incumbent Wi-Fi Spectrum: 2.4 and 5GHz

Running Wi-Fi over 2.4 and 5GHz was satisfactory in the beginning when network load was modest, and there wasn’t that much tech around. Yet it has gotten only worse in heavily populated areas where millions of interconnected devices are now sharing the same frequencies, resulting in spotty connections and network disruptions. At this pace, it could become even more unreliable, as the number of Wi-Fi connected devices and services keeps increasing.

The future of technology is very exciting, but old-school Wi-Fi is not going to cut it anymore with AR/VR gadgets, UHD video streaming or high speed tethering. At least a few tech giants are fed up with how things are going, thus why they’ve started pushing for additional spectrum that would serve this new breed of applications. 6GHz will have more channels that are 160MHz wide, and will allow more people to transmit and receive data at higher speeds. This is actually a revolutionary expansion in Wi-Fi capacity. 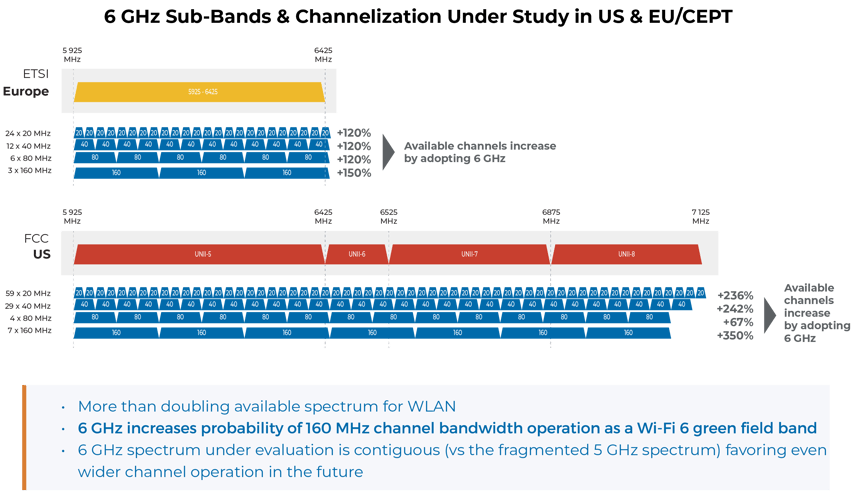 Last year, the Wi-Fi industry was celebrating a major achievement, as the FCC has decided to allocate more spectrum for Wi-Fi in the 6GHz. While it seemed like a huge success story, in reality the industry had encountered another problem: there are thousands of licensed microwave 6GHz links in the United States, mainly used by the cellular industry and various utility and safety services. Naturally, now they fear that unlicensed 6GHz activity might cause signal disruptions. The mobile industry is taking steps of its own, applying to the FCC to allocate a chunk of the 6GHz band for licensed 5G operations.

The Wi-Fi industry in general is not interested in starting a war, so instead of fighting over 6GHz dominance, they’re actively searching for ways to share the spectrum, similar to the reality related to the existing bands. One solution is using Automatic Frequency Coordination, which could leave out unwanted interferences, but also requires Wi-Fi devices to be registered in databases and become ‘geo location aware’. The Dynamic Spectrum Alliance has already shared a detailed report on how AFC could automatically control any unlicensed band.

In another instance, a group of tech giants appealed to the FCC for the approval of Very Low Power (VLP) Wi-Fi where portable devices that transmit below a certain power threshold (14 dBm EIRP) could traverse the 6 GHz spectrum without causing any interference. This would be very beneficial when firing up AR/VR technology, games, in-vehicle entertainment, cloud services and IoT appliances that are so reliant on seamless connectivity.

A report to the FCC states that VLP gadgets wouldn’t interfere with existing point-to-point links even when used outdoors, while successfully delivering 2Gbps at a distance of 3 meters. It also goes on to say that short-range high-speed low-power connections are suitable for 5G mm Wave backhaul, thus why VLP could also contribute to making 5G successful.

In August, another group presented new evidence on the usage of 6GHz. In a rare instance of solidarity companies such as Qualcomm and Broadcom have appealed to the FCC, presenting a fresh European study which shows that low-power indoor (LPI) Wi-Fi can share the 6GHz band without causing unwanted interference. Basically, the signal would be isolated, preferring network density over range. In their appeal to the FCC they also talk about provisions ensuring that indoor devices remain indoors. These include prohibiting removable antennas, weather-proof casing, battery-powered operations and labeling devices for indoor-only usage.

As a matter of fact, back in 2018 an American research paper also concluded that unlicensed radios don’t interfere with neither satellite, microwave and mobile, therefore they can coexist together.

A Final Decision Next Year?

Though there are no exact dates, and FCC and the EU take turns in who’s ahead of the other, both are actively in pursuit to resolve the issues and make the spectrum available. FCC is in the works on NPRM (Notice of Proposed Rulemaking) while the EU has already conducted a first CEPT report and likely to conclude a decision in March 20.

On September 24, 2019, FCC Chairman Ajit Pai once again reiterated intentions to release 6GHz band to Wi-Fi. Unfortunately, though there is lots of excitement, regulatory work takes time, especially since there are strong interest groups on both sides of the trenches, so it will take at least a few more months to play out.

Celeno believes that the regulation dilemma will finally be resolved and rules published in 2020 with regulation in affect in early 2021. Most experts agree that in 2020 some devices (such as smartphones) will start to be released with 6GHz-enabled features, and this will further encourage the regulative trend.

To understand how 6GHz utilization will benefit from ElasticMIMO™ download our white paper here.