Dual-band (2.4 GHz and 5 GHz) Wi-Fi Access Points (APs) and client devices are widely used in homes, businesses, and public spaces. While the client devices typically operate in either one of the two bands at any given time, the APs generally operate on both bands concurrently.

To add capacity and reduce congestion, a few years ago some AP vendors started offering ‘Tri-Band’ solutions. These APs operate in the same two bands as before but they use two separate channels in the 5 GHz band in addition to the one in the 2.4 GHz band. So effectively there are three independent Wi-Fi networks (one in 2.4 GHz and two in 5 GHz) operating with a single AP hence the reference to “Tri-Band”. Still what may have been adequate in Wi-Fi 5 with 80MHz, is not practical in Wi-Fi 6 with 160MHz since the 5GHz band is limited in its amount of available bandwidth for operation of two independent radios in maximum performance.

Fast forward to Wi-Fi 6 era. Around the time of the introduction of the Wi-Fi 6, regulatory agencies around the world released new unlicensed spectrum in the 6 GHz band which is more than double the spectrum available in the other two bands. Wi-Fi 6 operation in the 6 GHz band is referred to as Wi-Fi 6E to distinguish it from Wi-Fi 6 operation in 2.4 GHz and 5 GHz bands.

With this newly available 6 GHz band Tri-Band will become the new entry-level for APs that can operate in 2.4 GHz, 5 GHz, and 6 GHz concurrently. A Tri-Band solution with the huge spectrum in the 6 GHz band can deliver much needed boost in Wi-Fi capacity and higher speeds while maintaining compatibility with older dual band devices and alleviating congestion in all bands.

In addition to the three bands, the APs need to offer MIMO capability for each band. Together the bands and MIMO combinations present a significant challenge for the chip designers. Operating multiple radios in different bands concurrently can cause significant mutual interference within an AP. For simplicity some chip designers implement one frequency band per chip and three such chips are used in a single AP for a Tri-Band solution. The required number of interface ports with the host processor in an AP also increases when using separate chips for each band.

A challenge for an AP operating in the 5 GHz band is that a majority of the spectrum is shared with other incumbent services (e.g., weather radar) that have priority over Wi-Fi operation in those channels. For an AP to be able to use any of these channels, it has to first perform Channel Availability Check (CAC), i.e., scan the spectrum and ensure with high reliability that a channel is not used for radar. The overall channel selection process is called Dynamic Frequency Selection (DFS).

As per EU regulations, it is possible to have “Zero-Wait-DFS” through the use of “Off-Channel-CAC” which is a scan on a channel different from the channel on which the AP is actually active at that time.

In North America, since the FCC rules do not allow channel pre-clearance, an AP must perform CAC for 1 minute (or 10 minutes for some channels) before using a DFS channel. Further, if a channel being scanned is found to be used for radar, then the AP must switch to another channel and start over the entire CAC process.

Spending one minute, ten minutes, or even more time for CAC by an AP can have a significant negative impact on the entire network including all the devices connected to the AP in 5 GHz band, especially noticeable for latency sensitive and real-time applications.

The Tri-Band Plus AP operates in the 2.4 GHz, 5 GHz, and 6 GHz bands concurrently while in parallel monitors channels in 5 GHz or 6 GHz bands. For example, a Tri-Band Plus AP can operate on a non-DFS channel while monitoring a DFS channel in parallel using the built-in listening radio  and clear it while meeting the specified reliability and CAC duration requirements. All this is done before switching to the DFS channel without any interruptions to the Wi-Fi operation on its current channels in any of the three bands serving a large number of devices and total throughput in multi-giga bits per second.

An example of such a Tri-Band Plus AP design using Celeno CL8080 and CL8086 chips is illustrated below. In this architecture, the single CL8080 chip provides 2.4 GHz and 5 GHz concurrent dual band Wi-Fi 6 operation with 4x4 MIMO in each band. In this example, the single CL8066 chip provides 3x3 Wi-Fi 6E operation in the 6 GHz band while in parallel supports a dedicated “Listening Radio” for either 5 GHz or 6 GHz. Note that only two PCIe interfaces are needed for integration with the host CPU. 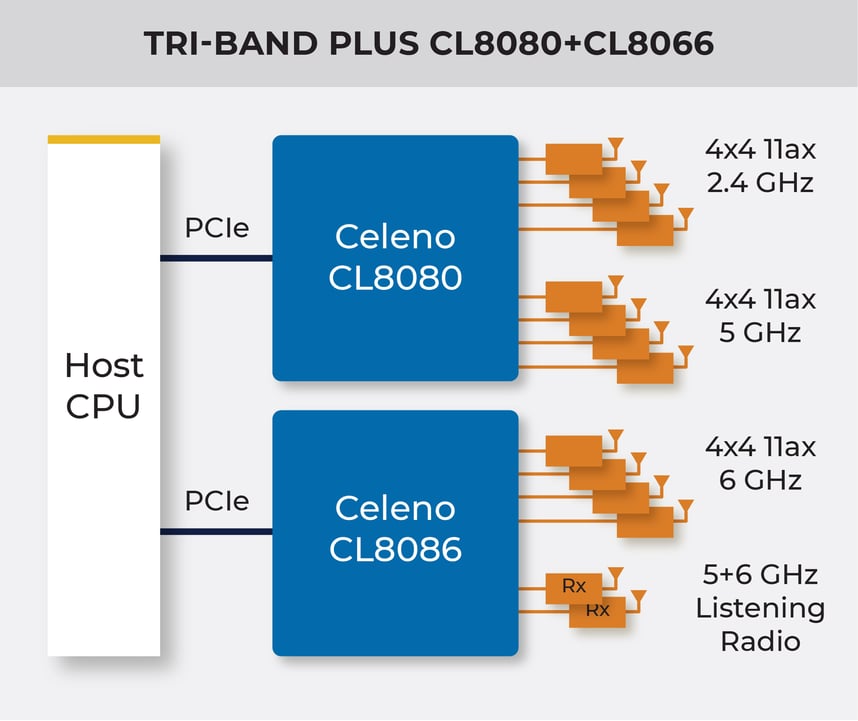 Celeno is the only company offering a two-chip Wi-Fi 6/6E solution that supports Tri-Band Plus (concurrent transmission over 3 bands plus a dedicated listening radio) solution.

Celeno chips also support a ‘Quad-Band’ AP solution that offers concurrent transmission over 2.4 GHz band, two independent channels in 5 GHz band, and in 6 GHz band.  A Quad-Band AP can dedicate one of the 5GHz or 6GHz bands for the home wireless backbone between the Gateway and an extender without having to share that band with serving clients. 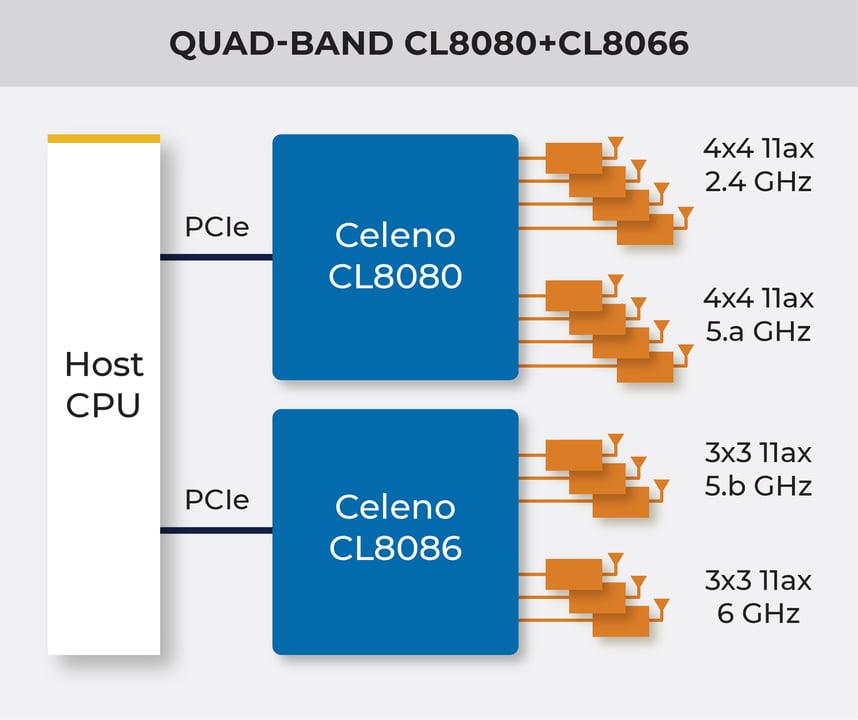 Beyond the obvious benefit of Zero-Wait-DFS and elimination of CAC interruptions to the normal Wi-Fi operation on the channel on which an AP operates, the Dedicated Listening Radio in a Tri-Band Plus AP offers other important advantages.

Spectrum Agility: Spectrum usage in today’s dense networks can very rapidly degrade. Having the ability to refresh the AP’s view of the entire spectrum usage faster with the Dedicated Listening Radio can improve the AP’s performance enormously. It can yield proactive actions (e.g. transition to a higher power channel if available or to a less occupied channel) and not only reactive transitions (in case interference/blockage of the current channel becomes unbearable).

Interference Characterization: If an AP can monitor a channel for a longer duration, it can characterize the interference better. For instance, it can detect whether another Wi-Fi device is operating on that channel and it can even decode the Wi-Fi transmissions (e.g. the beacons). This can help determine whether the interference is coming from a neighboring AP that is within the same service management scope to enable better coordination. It can also allow the AP to identify non-Wi-Fi interferer types.  It is especially important in dense neighboring deployments such as in MDU’s and office buildings

Technical Analysis: Dedicated Listening Radio can be used to monitor a channel and decode the ongoing Wi-Fi packet transmissions and flows over it. This is practically equivalent to a computer equipped with a sniffer radio and software tools that assists engineers onsite in debugging networks and connectivity issues. An AP equipped with a Dedicated Listening Radio can save technician physical presence in the network premise.