During the second half of the 20th century, television has become a primary medium for both news and entertainment. It wasn’t long until marketers realized that the TV set can also be used as a marketing tool. Here’s a piece of history from 1987 when TV meters were first introduced, promising a new era of marketing, raising both joy and anxiety. For a long time air time price was solely based on these boxes, believing that their gathered information gives a pretty good idea on people’s watching habits. Commercials were also based on TV ratings provided through TV meters.

The Gap Between TV and Internet Ad

How accurate and detailed could the “people meter” be? There really was no efficient way to determine gender or age through an old-fashioned gadget plugged into your TV set. And how can you be sure if the viewer is even sitting in front of the TV or not? People often just turn the set on and continue doing something else. Also, let’s keep in mind that TV meters were installed only in a small sample group of selected houses, so it’s not like we could get full and accurate data on people’s preferences.

Now, it’s a whole different story with the Internet. Digital marketers possess a very sophisticated set of tools to observe online activity, meaning that they have a lot of data: what you read, click and obsess about. Not to mention that they get loads of personal data that users are willing to share themselves. The bottom line is that online analytics provide extensive insight on who’s sitting behind the screen, and that’s why online ads are often so shockingly tailored to your needs – sometimes to a point where you feel like a character in a Black Mirror episode.

The TV industry used to “own” its audience for lack of alternative ways of consuming content. The advertising industry in the 60s or 70s categorized people into one of very few segments such as ‘housewives’, ‘working me’ or ‘teenagers’, and offered content that's relevant to these social groups. Back then this granularity was good enough. It's a little trickier today since people nowadays have a lot more alternatives to consume content, and therefore boxing people into broad categories won’t cut it anymore.

The TV industry is fully aware of its deficiencies, and they are losing business to ‘over the top’ players such as Netflix, Disney or Amazon. One of the keys that may allow the TV players to improve their situation is to be able to offer advertisers accurate real time data on who’s watching which channel.

New players such as iSpot are already promising a new generation of TV Ad measurement and TV Attribution. By adding such functionality to the TV solution architecture, the TV industry could start offering tailored ads in a similar fashion as its younger media counterparts. 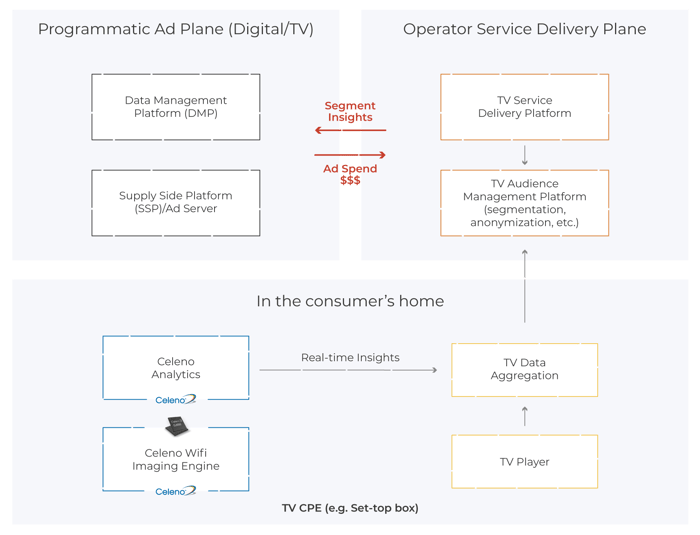 Wi-Fi Doppler Imaging technology would allow TV operators to create significantly higher value for advertisers, which in turn would be willing to pay much more for an ad opportunity. For example, Wi-Fi Doppler Imaging can be used to gather real-time information on how many people are sitting in front of each TV set at any given moment. This can increase the income per advertisement real estate if the operator can show exactly when there’s a person actually watching, and that there are for example three people watching versus only one. The technology could be useful with targeted advertisement schemes but even with simpler non-targeted advertisement implementations.

TV Industry Could Be Kickstarted Once Again

Experts have been predicting the slow death of television for a while now. They have a point because a Nielsen-based chart from Statista shows that millennials spend significantly less time in front of the TV than other older adults. Americans ages 18-34 watch only a third of what adults aged 50-64 do.

Obviously the TV related industry players are looking for ways to slow down this trend, and maximize revenues from their historical relationships with viewers. Wi-Fi Doppler Imaging technology has the potential to pull them up into the era of hyper personalization and help them increase the income they see from advertisers.