Apple once shook the world to the core by introducing touchscreen smartphones and completely reinventing the idea of what a cell phone is. That was over a decade ago. Since then we haven’t seen anything remotely close to making such an impact, but tech giants are working hard – and this year Google is taking a shot at making history by introducing the Pixel4. While the new smartphone sports several improved features, one that especially draws our attention is the in-built radar sensor that allows hands-free interaction with the gadget.

Is that useful? Is it necessary? Difficult to say since the technology is still in its infant stages, and as the Guardian points out in a recent review of the Pixel4, the motion sensor worked well when on a desk, but was harder to trigger when handheld. However, though some reviewers found it a flawed gimmick, we want to congratulate Google just for attempting to use radar technology instead of motion-tracking cameras. We believe that radar-based gesture recognition will get much better in the future, and Celeno is happy to announce that our Wi-Fi Doppler Imaging technology now capable of hand gesture detection and recognition for a variety of applications.

Hand gesture technology can be a great alternative to voice recognition, as you can control gadgets silently, without fear of waking up your partner in bed or interrupting people at work. Also, voice recognition can be limited when it comes to controlling a TV, which produces sounds that interfere with your voice. Whether it’s computers, microwaves, fridges, air conditioners or lights – being able to control technology using only your hands sounds very cool to say the least. Human interaction with machines should be flawless and intuitive, and what can be more natural than digging your fingers into the air – just to witness a smart gadget come to life.

If you’ve ever seen sci-fi movies where people control computers with a flick of a finger, it’s likely that such technology has something to do with radar sensors. It’s true that camera-based recognition systems can produce a similar result, but they are likely to fail in dimly lit or totally dark environments. Plus, it can get a little creepy with cameras peeping on you all the time – we do need to retain our privacy, right? Now that’s definitely not the case with radar sensors, as it only tracks frequencies reflected from body movement. Studies have also shown that Wi-Fi radar recognition systems using convolutional neural networks are more efficient and cheaper, with the capacity to store huge databases of hand gestures. Such sensors receive hand gesture signals that are instantly processed and recognized using time-frequency analysis. 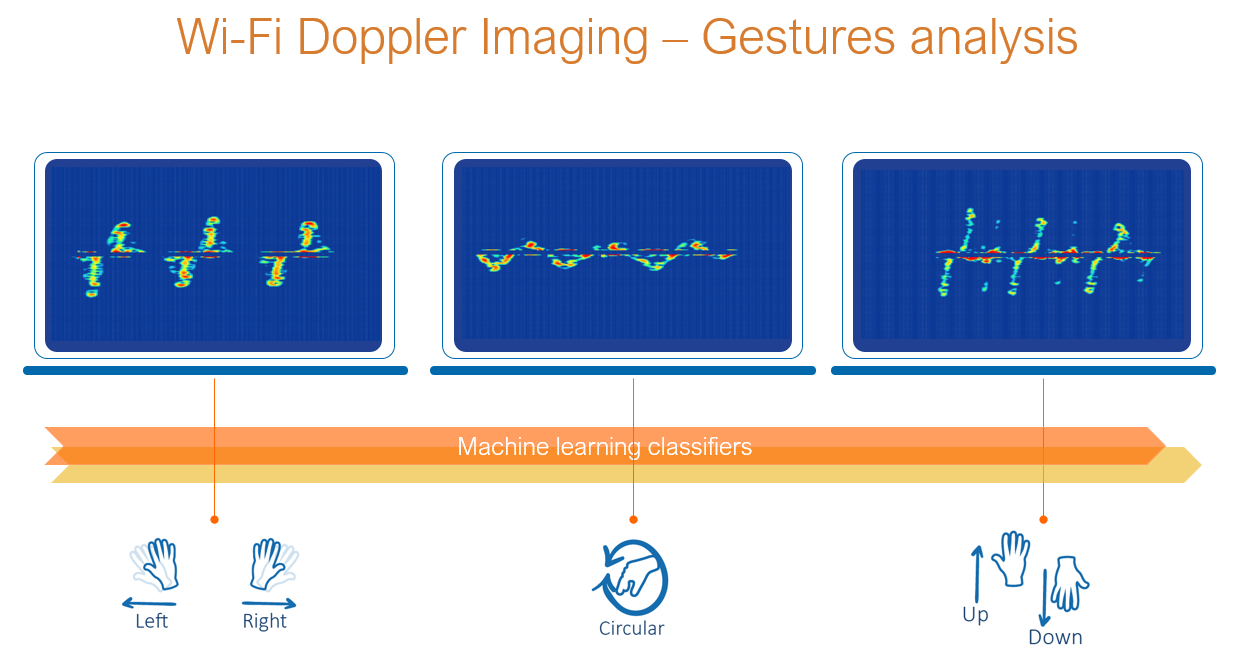 So once again, why should somebody care about waving around fingers to control your phone, laptop or TV? Same reason as to why people once made fun of touchscreens and voice recognition technology, and later grew to accept them as a “must have”. We have gotten used to swiping screens and talking to our phones because it feels natural. Convenience is what drives us towards adopting new technology.

If you’re interested to find out more on why Wi-Fi Doppler Imaging is the right fit for implementing hand gesture recognition for your use case, don’t hesitate to contact us for a demonstration.