Not all Homes are Created Equal - Elastic MIMO Overcomes This

Broadband Service Providers in 2019 are faced with the challenge of delivering high-quality Wi-Fi anywhere, anytime, and on any device, all while keeping to a cost structure that will maintain their competitive edge. With the number of connected devices growing wildly, this is becoming an increasingly difficult goal to achieve.

High-quality Wi-Fi means that media sessions don’t drop, games work consistently well no matter where they are played or how players move around the house, video quality is always good, and smaller, older devices are not starved for bandwidth by high-performing applications.

One of the most common challenges that operators face is the need to deliver such quality to homes which, by nature, differ from one another greatly.

Homes are diverse in terms of their geophysical conditions. Walls and objects affect radio signal propagation, and devices such as microwaves and cordless phones create electromagnetic noise which interferes with the Wi-Fi signal.

There are many additional factors that create diversity in home environments, but possibly the factor that poses the biggest impact is the spatial distribution of the demand for data capacity across the different areas of the home.

Think of an operator that needs to serve a customer with a home similar to the Brown’s family home as described below. 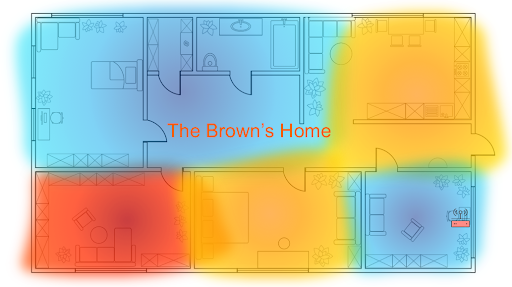 The Browns are an older couple and they own a big house and many of the Wi-Fi devices they use are of an older kind, mostly operating only in the older 802.11bgn technology in the 2.4GHz frequency band. The colors in the figure above represent the demand for bandwidth in their house during the ‘peak demand’ hours of the day. Red represents the areas where the demand is the highest, yellow is medium demand and blue designates areas with lower bandwidth demand.

The Brown family members are hoping to experience quality connectivity anywhere. Notice that the Brown family chose to place their access point in the reading room (shown on the bottom right of the drawing), although the higher capacity demands during the ‘peak hour’ is in the living room (shown on the bottom left of the drawing).

This situation is unfortunately very common. The service provider should never rely on the users to choose to place the Access Point (AP) necessarily in the point that optimizes reach and capacity, because people’s decisions about where to place the AP are often determined by aesthetic or cabling considerations. In this example, the Browns actually thought that the best place to put their AP was in the reading room because it happens to have a cabinet with some empty space on it and an available power outlet.

The result is that the Brown family are likely to experience lower capacity (read as poor performance) in the living room (bottom left) where they need it most, and will subsequently be unhappy with their service provider.

Wi-Fi access points are generating a signal in two seperate frequency bands - 2.4GHz and 5GHz (and in the future 6GHz as well). 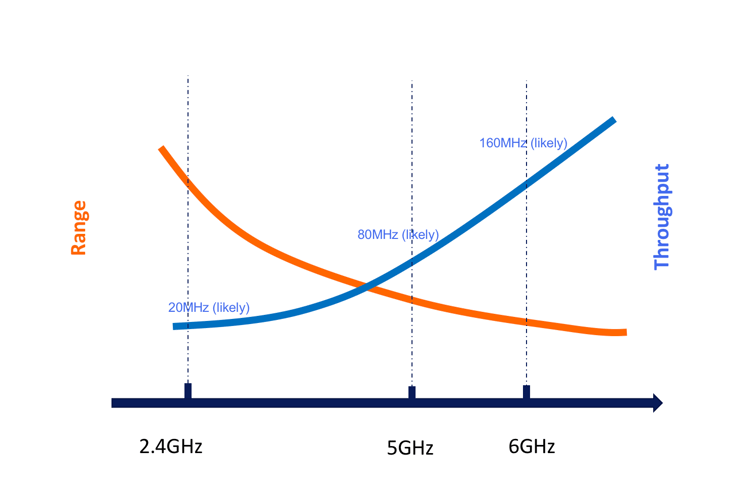 In the homes where spatial distribution of the demand is similar to the Brown’s family home, a service provider would be able to provide higher quality Wi-Fi if they supplied an AP equipped with more 2.4GHz antennas, for example: an AP with 6 antennas of 2.4GHz and 2 antennas of 5GHz. This is because of two reasons: Firstly, the far range between the Access Point location and where the Browns' consume most of their content; and secondly, because the bulk of the devices they have in home are of an older kind, using only 2.4GHz technology .

Unfortunately, every home is different, and the service provider needs to also serve some clients that are more similar to the Wilson family. The Wilsons are a younger family, coll millenials that love technology, own the latest devices and consume a lot of digital content. In the figure below you can see the drawing of their home. The Wilsons chose to place the AP in a central location in their home. The Wilson’s house is much smaller then the Brown’s and the distance between the AP and the areas of the home where the demand for throughput is highest is much smaller than the distance in the Brown’s home. 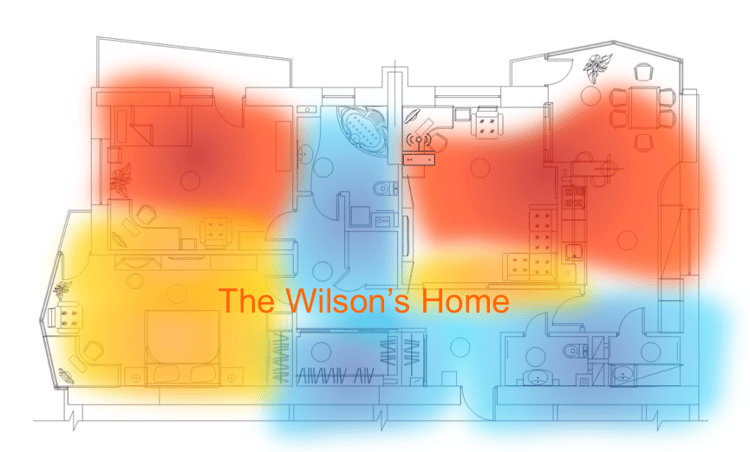 So in the Wilson’s case, the service provider could provide better quality Wi-Fi with an AP that’s equipped with more antennas at 5GHz - which is served by faster Wi-Fi standard, because that will provide more throughput.

Unfortunately, the service provider doesn’t know ahead of time, which of their customers are going to place the AP in a point where one configuration of antennas or another would be best. They usually learn these things only later when the complaints start pouring through their customer support system.

Elastic MIMO is a disruptive technology which tackles such challenges offering a huge advantage. It dynamically self-allocates a bank of 8 radio chains and MIMO streams between two Wi-Fi radios in 2.4GHz and 5GHz bands, creating a flexible MIMO configuration ranging from 2x2 and up to 6x6 per each Wi-Fi radio.

The only other way to match such Wi-Fi performance without Elastic MIMO is by replacing the Wi-Fi Access Point on the fly or sending every home a different router after sending an engineering team to run some measurements at each home.