160 MHz Wi-Fi Clients - It's Not All About Throughput!

Wi-Fi 6 is the next generation wireless technology that offers higher speeds but more importantly it improves signal reliability, network capacity and efficiency in dense deployments. The two notable features that enable this increased network speed and efficiencies are the support for the higher channel bandwidth of 160 MHz (vs. 80 MHz of Wi-Fi 5 and 40 MHz of Wi-Fi 4) and the MU-OFDMA which enables operating in a subset of the bandwidth called Resource Unit (“RU”) which can be as small as 2 MHz.

It is natural to wonder whether there is a benefit in choosing a high end, new generation, 160 MHz capable solution if the intended use case may not demand more than a few 100 kbps of throughput at any time.

Well, the answer is a big YES. Wi-Fi 6 is all about improving efficiency of Wi-Fi networks in dense deployments and is less focused on increasing peak throughput – something which was the case in previous Wi-Fi standard generations. So even though one of the benefits of Wi-Fi 6 could be increased peak throughput and 160 MHz is certainly a contributor to it, the combination of 160 MHz and MU-OFDMA has a major contribution to the higher efficiency and higher overall throughput of dense networks.

The selection and deployment of 160 MHz capable client devices can help realize the true potential of a Wi-Fi 6 network, including the 4x efficiency improvement compared to a Wi-Fi 5 network.

A 160 MHz device can improve the efficiency of the network in two independent ways:(1) The 160 MHz channel bandwidth with higher throughput reduces the airtime taken for each packet transfer and (2) the MU-OFDMA allows transmission of packets from more devices simultaneously. Another benefit of 160 MHz devices when combined with the MU-MIMO is the improved network resiliency by reducing the impact of interference. Together, these features make all the applications, high and low throughput, more efficient and resilient.

Consider the case of dense deployments such as in a home with 20-30 devices or commercial deployment (enterprise, factory, building) with many IoT end points and employees. The air medium in such deployments is very congested as every device tries to get an opportunity to transmit or receive data. Operating 160 MHz capable devices in this scenario means that they would consume very short airtime to transfer packets. This would be true for all packet sizes, small and large.

The reduced airtime a device requires for a certain packet load, the higher its chance to utilize the air medium. Otherwise, packet hold time will increase exponentially, and in severe cases, quick escalation would happen and the network may effectively stall with no practical network capacity.

We have seen cases that crossing a threshold of 50-70% load may quickly deteriorate a network’s performance if too many of the STA’s are just not fast enough to carry over its packets in a short enough available time slot.

By utilizing 160 MHz channels (vs smaller bandwidth), the air medium time is removed from being the limiting factor for the network performance.

As an example, consider a device that needs to send one packet per second. Certainly not a demanding application. With fast 160 MHz channel capable of operating in 100’s of Mbps or even in excess of 1 Gbps – the STA will be able to finish the transmission in a matter of a few milliseconds – increasing its likelihood of consistently finding an open air slot to transmit it – even in a loaded, saturated network that supports 50 or more clients.

MU-OFDMA in Wi-Fi 6 organizes the channel bandwidth into a number of RUs of varying bandwidths to enable transfer of packets of different sizes from multiple clients simultaneously. As illustrated below, the smallest RU uses 26 tones and occupies about 2 MHz bandwidth. At any given time, a single channel can be arranged into multiple RUs of different sizes simultaneously. This allows the allocation of different bandwidth to different client devices based on their needs. But a 20 MHz channel or even an 80 MHz channel is not wide enough to serve a large number of devices in a dense network with many overlapping Access Points. A 160 MHz channel with 74 RUs of 26 tones each has a lot more flexibility in terms of how the channel is organized with different sizes of the RUs as shown below.

Now consider the case of a high rise building with many neighboring Access Points that may operate simultaneously (even on different channels). They would inflict some interference on each other. In heavy interference scenarios, actually it is beneficial to operate in the smallest possible bandwidth – the smaller the operating spectrum bandwidth the less prone it is to interference. Operating in a small RU would allow a network to improve the utilization in two ways: transmit simultaneously from multiple clients leveraging the MU-OFDMA while simultaneously finding a cleaner, non-interfered portion of bandwidth by leveraging the smaller RU chunks.

An example of the interference situation in a particular network in dense deployment with lots of client devices operating on a 160 MHz channel with total 74 RU-26 could look like as shown below. 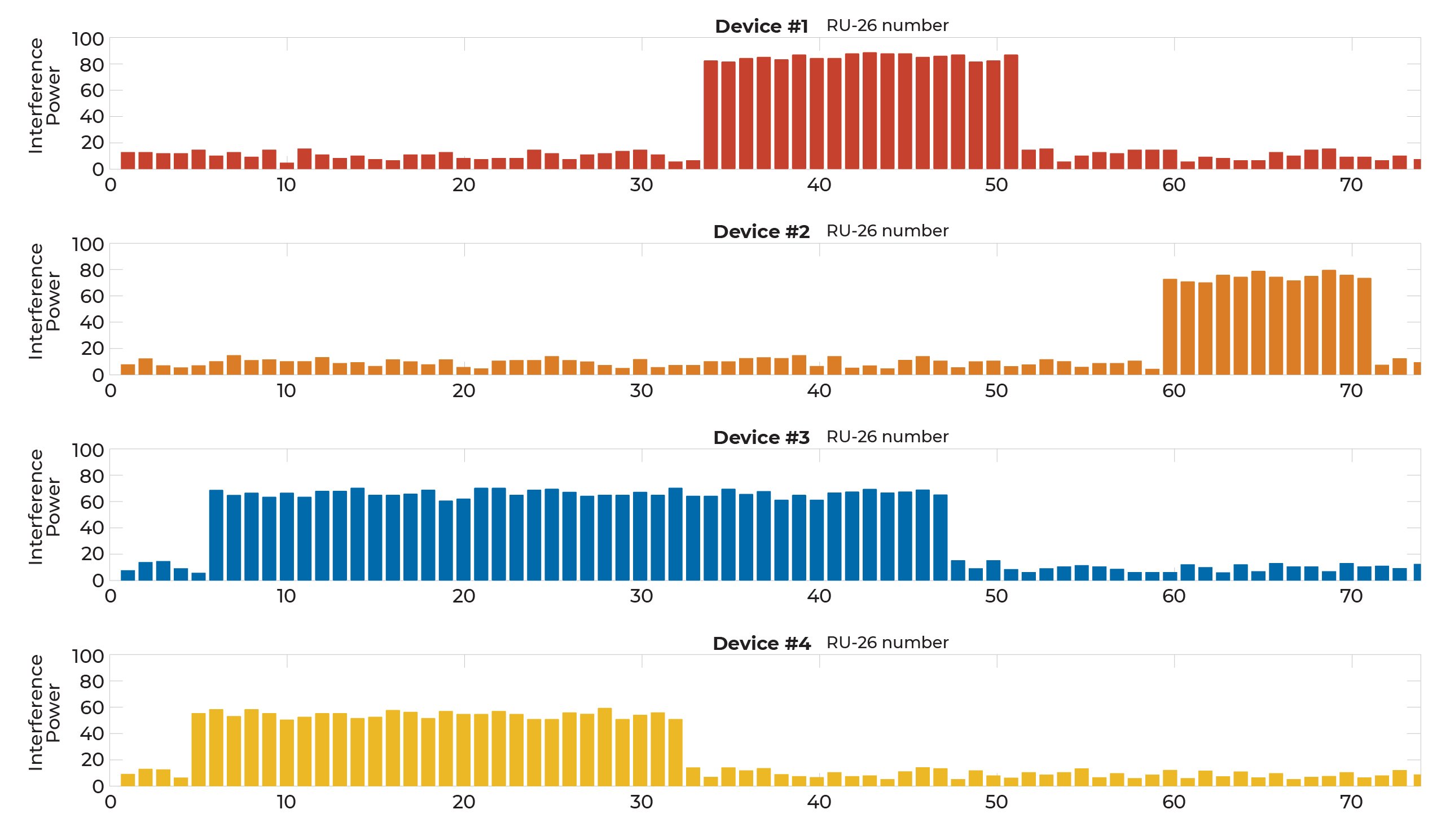 Wi-Fi 6 devices with 160 MHz channel bandwidth improve the efficiency and resiliency of both  high and low throughput applications. This is achieved by higher throughput which reduces the airtime taken for each packet transfer which frees up airtime for other devices. With 160 MHz channel the MU-MIMO feature can allow many more devices to transmit simultaneously. The wider bandwidth combined with MU-MIMO also enables the devices to transmit packets even in very congested, interference heavy deployments that are common in urban settings.